Prayers for Leaders of the Nations 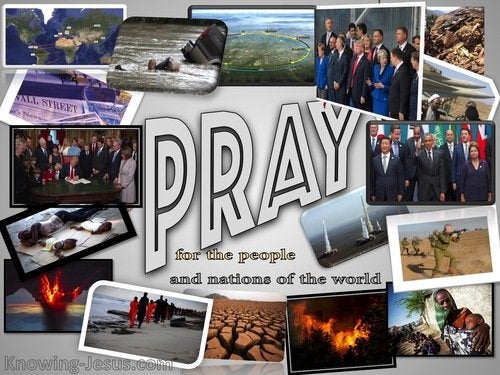 For Christians In Leadership Positions
For National Repentance, Deliverance And Truth
Prayer For The Leaders Of Our Country
Prayer For Leaders To Come To Know Jesus
Prayer For Our Government
Prayers For United Nations
Prayers For World Leaders

For Christians In Leadership Positions

Loving Lord, I bring before You the many leaders of the world, and those in high positions, knowing that the nation whose God is the Lord is a blessed nation indeed. I pray for those leaders around the world, who are seeking to abide by the truth of Your law. May they be tools, used by You, to maintain justice and righteousness in their respective positions and nations.

I particularly lift up those men and women whom You have called into national leadership positions and pray that they will give You first place in their lives. May they seek You diligently in prayer when they are called upon to make difficult decisions that affect the lives of so many people.

Lead and guide them into all truth and guard them from the ridicule that Christian leaders of our nations inevitably have to face in a world that has predominantly abandoned the truth of Scripture.

Lord, I lift up all kings, governors and those in high positions, and pray that You will bring many to faith in the Lord Jesus, so that we may all live peaceably in this world into which You have placed us.

Protect our nation O Lord I pray, and bring us back to a nation whose God is the Lord. In Jesus' name I pray,

For National Repentance, Deliverance And Truth

Dear Lord and Heavenly King, thank You that there are no boundaries in Your kingdom and that You ultimately rule over heaven and earth, despite the fact that wickedness and evil seeks to dominate the nations of the world as well the lives of individuals.

I pray that You would set up godly men and women in positions of leadership and power in our own nation and in all the nations who exercise authority in our world today.

Thank You for those leaders that are prepared to stand up for truth and righteousness. Give them boldness to challenge those who want to to remove the principles of freedom and tolerance and establish the flawed principles that come from human wisdom.

Lord, I pray that You would guide the leaders of many nations to repent of their sins and turn to the path of peace that only comes from You. Help them to understand that the only peace that will ever be established on earth will be under the rule of the Lord Jesus Christ Himself, after Your wrath has been poured out on a Christ rejecting sinful world. Have mercy Lord. Have mercy on all the leaders of nations who do not know You. I pray that many will be saved by faith in the Lord Jesus Christ, in Whose name I pray.

Prayer For The Leaders Of Our Country

Heavenly Father, we praise and thank You that You are the most High God Who rules in the kingdom of men. You set up leaders in their various offices and remove them by Your mighty will.

Father, we lift up the leaders of our country and all those that You have set up in places of authority to rule and govern our nation, both political and religious, and we pray that they would rule our land and the many institutions with wisdom and integrity.

We pray that each one would carry out their various responsibilities with honesty and for the benefit of the nation. Clothe each one with righteousness and justice, and we pray that all selfish ambitions would be laid aside, and that Your plans and purposes are fulfillled for the well-being of all citizens.

May Your ways be known in our country and Your name be lifted up in the corridors of power. Guide our country we pray, into the ways of peace, justice and truth. This we ask in Jesus' name,

Prayer For Leaders To Come To Know Jesus

Heavenly Father, I acknowledge that You are a gracious and merciful God, but I also know that you are also holy and righteous and cannot and will not look upon sin.

Be merciful I pray, to the nations whose leaders have turned their backs on You and the Lord Jesus Christ, Whom You sent to die for their sins. Be merciful to all those in positions of power who are seeking to implement a humanistic and anti-god agenda. Be merciful to those men and women in high places that are seeking to remove all vestiges of Christianity and the One true God from their nation’s laws and rules.

Have mercy on the leaders who have deliberately rejected Your path of truth and justice, and bring them to saving faith in the Lord Jesus Christ. In Jesus' name,

Prayer For Our Government

Father, we thank and praise You for the many blessings You have bestowed on our nation, blessings that we don’t deserve but which You have showered on us in Your grace and mercy.

But Father, we know that our country seems to have lost its way and our government seems to be spiralling out of control, and we have no one to look to but You. We pray, that You would look down on our country with pity and great mercy, and we pray that our government would be convicted of their need to turn once again to You for wisdom to govern this once great nation in a way that is honouring to Your name.

We pray for each of our leaders and lift them up to You, praying that they would look to You both individually and collectively, so that our nation may be governed according to Your plans and purposes. But if as a nation we are to face Your displeasure because we have turned from Your statues and disobeyed Your laws, we pray that You would be merciful, and we ask that in Your grace many of our leaders would to cry to You for salvation and help. This we ask for the sake of our Saviour, Jesus Christ our Lord,

Father, we come to You to pray about the United Nations knowing that they are pursuing an agenda that is so often counter to the truth of Your Word, and at times seems diametrically opposed to godly principles.

Father, we recognise that many of their programmes and policies are couched in issues like sustainable development, global warming, global consciousness, and civil liberties, and we begin to realise that behind much of their agenda is a spirit of control.

Father, we know that You are in full control of all that takes place in our world, and that members of the United Nations can do nothing that is not permitted by You. We pray that You will expose anything that is designed to undermine godly principles in our lives, and pray that You would remove anyone who abuses their power or is seeking to place people under bondage or manipulate the world’s resources for their own personal advantage.

Lord, we know that the time is short and that the Lord Jesus will return to take the Church to be with Himself very soon, but we pray that in Your grace, You would alert those Christians that have not yet recognised the serious implication of these UN subtle policies that are being implemented and which are designed to enslave the world, eliminate state sovereignty and bring in the false religion of the Anti-Christ.

Father, the world needs judgement, but we plead that in Your wrath You would show mercy, and we pray that many would repent of their support of the UN and come to saving faith in Jesus Christ our Lord and Saviour, before it is too late. We ask this in Jesus' name,

Loving Father, at a time when there is increasing unrest and growing fear of what is coming on the earth, we bring before You the leaders of the various nations of the world, and pray that in Your grace and mercy You would intervene and help those that are suffering so greatly in so many nations.

We pray that world leaders would seek after wisdom and justice, mercy and truth, freedom, godly grace and a desire to know You more and more. We pray that those that are deliberately opposing Your will and pushing an anti-God agenda, would be removed from their office and that their plans and purposes would be exposed, and become ineffective.

We grieve for those that are living in war-torn countries of where there is much blood-shed, corruption and unrest in their governments, and pray that in Your pity and grace You would intervene, by removing corrupt leaders and replacing them with those of integrity.

But Lord, we also know that until the Lord Jesus returns as Prince of Pease to set up His millennial kingdom, the current unrest, wars and rumours of wars, corruption and distress will continue. And so we pray that You would be merciful to those that are suffering due to the increasing unrest and fear that is sweeping the nations of the world today. This we ask in Jesus' name,